Companies constantly focus on reducing operating costs, improving efficiency and eliminating the use of hazardous chemicals in the workplace. For High Purity and Ultra Pure Water production EDI strongly supports these goals and many thousands of systems have been installed over 30 years, operating successfully in many environments and applications.

What is EDI? – Process and components

Most EDI modules are built with membranes that are permeable to either cations or anions, in an alternating sequence. The spaces between them act as liquid flow compartments, each with an inlet and an outlet. Dependent on the polarity of the ion exchange membrane and its orientation to a cathode or anode, an individual compartment either depletes the water of ions (product water) or accumulates ions (reject water).

Unlike traditional Ion Exchange resin systems, EDI needs no chemical regeneration. All EDI devices producing ultrapure water operate in electro-regeneration mode, in which the resins are continuously regenerated by H+ and OH- ions, released by the electrically-induced dissociation of water molecules.

For more than 20 years, Pure Water Group has worked with EDI – designing, constructing and supplying EDI systems to extract the very best from this technology. Our EDI systems can achieve up to 99,9 percent salt removal, reduce the levels of individual ionic species to parts-per-billion or even parts-per-trillion levels, and produce ultrapure water with a resistivity of 10 to 18 MegOhm.cm (0,1 to 0,055 microSiemens/cm conductivity).

But outstanding water quality alone is often not the only goal. In our experience, the importance of recycling water has grown steadily, particularly in industries such as power generation and semiconductor fabrication, where huge quantities of pure water are required. Since the EDI concentrate (or reject) stream contains the feed water contaminants at 5-20 times higher concentration, it can usually be recycled back to the RO pretreatment. The recycle option increases the total plant recovery and so minimizes overall water consumption.

For more detailed information please have a look at our reference projects.

Most common uses for EDI 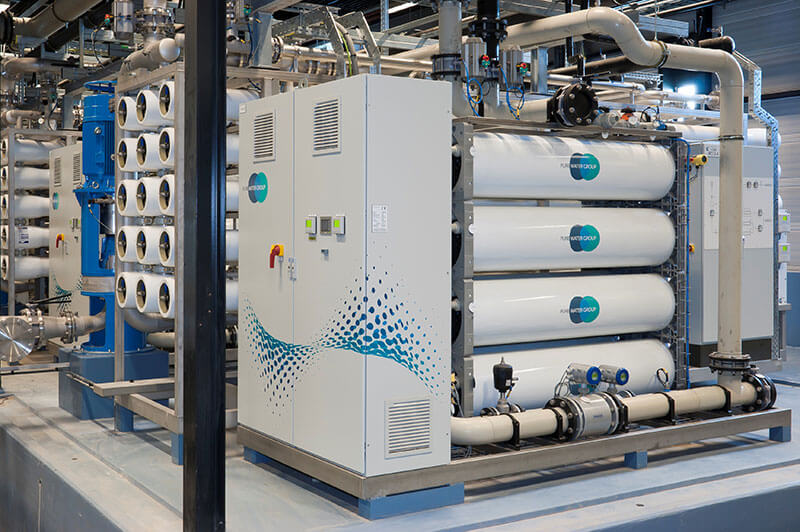 How does it work?