Along with other pre-treatment stages, such as softening, multi-media filtration and ultrafiltration, Pure Water Group incorporates Membrane Degassing in many high purity and ultra pure water systems.

The principle advantages of Membrane Degassing are:

What is Membrane Degassing?

Dissolved gases affect the quality of drinking water and can reduce the effectiveness of non-potable water purification techniques using Reverse Osmosis and Electrodeionization.

Membrane Degassing is a preferred answer to the problem, requiring no consumption or disposal of dosing chemicals to remove gases from solution. The technique uses a device known as a Membrane Contactor, or Membrane Degassing Unit (MDU). It employs a gas-permeable membrane, normally in combination with either a vacuum, or a flow of gas such as nitrogen, to remove the unwanted gases in the supply stream. Benefits of degassing include improved water quality, better process efficiency and higher performance of downstream purification equipment.

Membrane Contactors can be used to introduce gases to a liquid stream but most often, their function is to remove dissolved gas and bubbles. In the case of drinking water, hydrogen sulphide is commonly removed and in many industrial applications, oxygen and carbon dioxide are the target gases.

There are numerous industrial process water applications for Membrane Contactors. The most critical is wafer fabrication for semiconductor, display screen and photovoltaic cell production, where oxygen and carbon dioxide must be reduced to very low levels in the treatment of process wash water. This is important to eliminate the additional load on electrodeionization modules or ion exchange resins, which would otherwise prevent them from polishing water to the extremely low conductivity demanded.

In thermal power plants, where steam is generated at high temperatures and pressures to maximize efficiency, boilers, turbines and pipe systems would be subject to accelerated corrosion and scaling without appropriate feed water treatment. De-oxygenation is a vital corrosion counter-measure. However, deionization is also essential to produce ultra pure water, so that degassing is again a key stage in the process, frequently performed by Membrane Contactors.

As well as safeguarding the deionization of water in other industries, such as pharmaceuticals manufacturing, Membrane Degassing can also be important in laboratory situations, where dissolved gases in fluids can affect the accuracy of analytical equipment.

How does a Membrane Contactor work?

Contact is the key word in Membrane Degassing. Thousands of hollow fibres are packed into the degassing vessel, so that fluid passing through it is forced into contact with a massive area on the outer surface of the membrane fibres. Fluid flow is directed in a radial direction to the fibres, which further increases contact. As the hydrophobic membrane fibres are permeable to gas, the conditions are therefore set up to allow gases to be stripped from solution, into the hollow core of each fibre.

However, by introducing a vacuum or a stripping gas, acting counter to the liquid flow direction, the Membrane Contactor amplifies the effect. Before entering the Contactor, the dissolved gases are in a state of equilibrium, according to the temperature and pressure. The counter-flow inside the hollow fibres acts to destroy the equilibrium and forces more gas out of solution at the membrane interface. 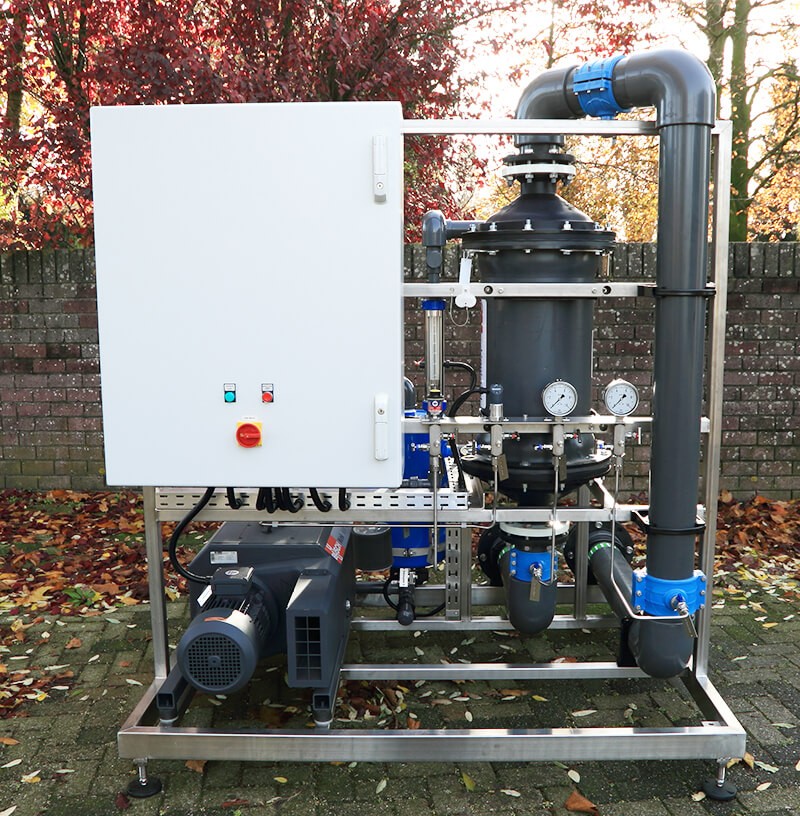 Thermal, or Pressure Degassing – This technique is used in the treatment of boiler feed and relies on keeping the water at boiling point. In a typical degassing vessel this is done by steam heating. As the solubility of the unwanted gases is close to zero at 100oC, they are driven out of the water and collected in a degassing dome at the top of the vessel.

If steam is not available for thermal degassing, the boiling point can be reduced by using a vacuum pump. Vacuum degassing requires more complex design and should incorporate a condenser, to reduce the vapour drawn into the vacuum pump.

Chemical Degassing – The addition of dissolved chemicals can be used to cause a reaction, converting oxygen to another chemical compound. It is a rarely used technique, in circumstances where extremely low O2 content is required, following thermal degassing. The consumption of reactants and production of chemical waste are the main undesirable aspects of the process.

How does it work?