SPRUNDEL, THE NETHERLANDS – To see what’s going on at companies in his municipality, deputy mayor Martien de Bruijn paid a company visit to Pure Water Group. As one of the world’s leading companies for state-of-the-art Electrodeionization (EDI) systems Pure Water Group is currently involved in a revolutionary and international scientific project.

During the company visit of Martien de Bruijn on Wednesday June 5th, it became clear to the deputy major that Pure Water Group is an extraordinary company. During this week a Factory Acceptance Test (FAT) of two water purification systems was conducted which were built for a project that’s being intensively followed by scientists and politicians worldwide: ITER.

ITER is a unique collaboration project in the south of France between the European Union, Japan, South Korea, China, India, the United States and Russia. Its purpose is to demonstrate the scientific and technical feasibility of fusion as a future energy source. Here, ten times as much energy would be generated than is needed for the generation process, which sounds like the solution of the global energy problem.

Nuclear fusion is the energy source of the stars, including our sun. In the enormous heat and gravity in the centre of the sun, the collision of hydrogen atoms causes these to melt and turn into a plasma of helium atoms.

Unlike nuclear fission, which is used in nuclear power plants for years, fusion is the opposite reaction and leaves no nuclear material. During this process the temperature is raised to 150 million degrees Celsius. Until recently, it was impossible to expose materials to such a high temperature, and so this process could not be reproduced. A few years ago, scientists nevertheless succeeded in separating this hot plasma from the machine wall using a strong magnetic field. This enormous amount of heat can power steam turbines that generate electricity, but that will not happen in this experimental setup. This is only about controlling the fusion process.

Ultrapure water is needed to cool the nuclear fusion system, and Pure Water Group is one of the few companies in the world that develops, builds and maintains such systems. To be allowed to participate in the ITER project, the Dutch company had to go through a strict qualification process. Because of their expertise, high quality and excellently organized documentation, they have been selected as supplier of the water purification system by Larsen & Toubro, the Indian builder of the large round vacuum-tight container for the machine.

A delegation of Larsen & Toubro responsible staff was present these days to check whether the built systems of Pure Water Group meet the strict requirements. The L&T engineers confirmed that the results are excellent and that they were positively surprised concerning the high quality of the manufactured systems.

After this the senior manager of L&T also presented the ITER project and highlighted the smooth cooperation with Pure Water Group. Mr. De Bruijn was visibly impressed: “I am particularly proud that a relatively small company from Sprundel does business at this level with global companies and cooperates in solving global challenges, such as the huge energy issue. In addition, today I heard that they are also building systems that desalinate water, so that countries without their own drinking water supply can produce this themselves. From the outside, you have no idea what is going on inside, but this is very special, I can say.”

Please get in touch with our team of specialists when you need additional information or a full quotation for ready-to-run EDI equipment at edisupport@purewatergroup.com or call +31 (0)165 34 82 53. 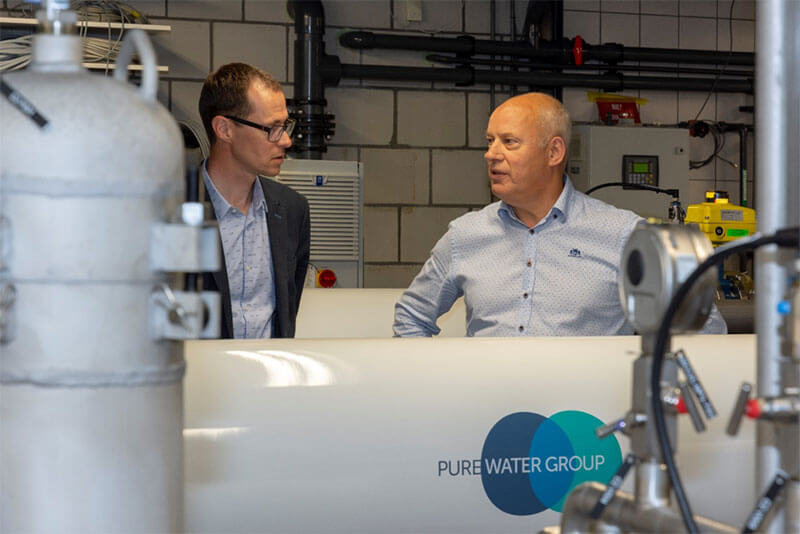 Martien de Bruijn (left) gets an explanation about the water purification systems for the ITER project from Johan Ossenblok, founder and owner of Pure Water Group.